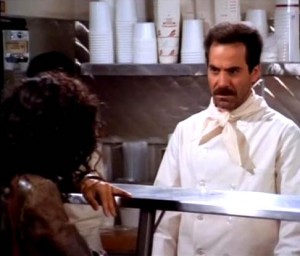 Tuesday, March 30th, 2010 was supposed to be the big day for AT&T to install their new uVerse service in my home.

Well sadly, as the “Soup Nazi” on Seinfeld would say, “No soup for you!!!”. For me is was AT&T saying “No uVerse for you” … at least not today, we’ll try again next week.

About a week ago I signed up for AT&T’s triple pack bundle which includes digital TV, internet and phone service. I received several email confirmations from AT&T confirming that my service would be installed today. This morning I received phone calls from two different AT&T installers, one for the inside the home work and the other for the outside of the home work. At least AT&T is organized enough to coordinate having two installers perform the required work at the same time.

Fortunately the inside premise installer was very friendly and helpful. He took the time to schedule a new appointment for installation next week.

So at least, unlike Ellen who was banned from having soup for one year, I only have to wait one week.

My real issue with AT&T is why didn’t they notify me earlier that there was an issue that prevented a smooth conversion to uVerse voice. All it would have taken was a simple call or email alerting me to the issue and the problem would have been resolved prior to my scheduled installation time.