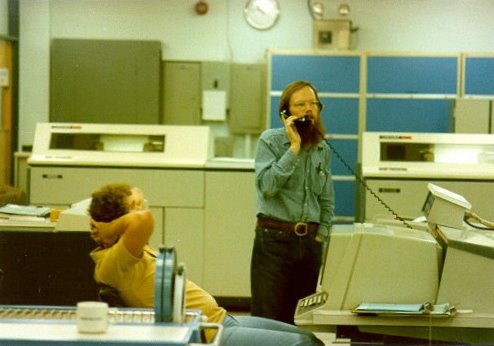 This is a picture of Joey Vossen and Barry Miller (two of the best programmers that I know – Barry wrote a standalone bootable operating system for the 1106 that played Mozart through the system’s maintenance speaker and Joey wrote a program that transparently removed deleted items from every program file on the system) in the University of Miami computer room. In the background you can see two Sperry Univac 770 line printers. In the foreground in front of Joey (who is sitting) is a Sperry Univac U300 console terminal. The U300 was the console device for the University’s Sperry Univac 1106. As I recall the 1106 @ UM had eight U16 tape drives (seven 1600 BPI 9-Track drives and one 7-Track drive for use with the University’s Calcomp plotter), several 8440 and 8430 disk drives, two FH-432 drums and one FH-1782 drum.

My guess is that this picture was taken sometime between 1976 and 1978.